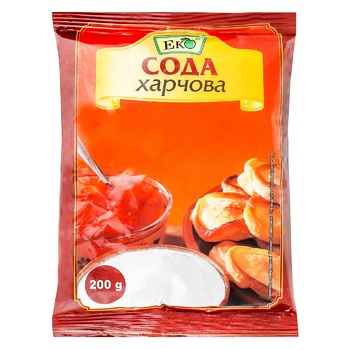 Soda as food, sodium hydrogen carbonate, a white crystalline powder, was invented by the French chemist Leblanc at the end of the 18th century. The discovery was classified for many years. And only the invention of another way of its receiving by the Belgian scientist E. Solvay in the middle of 19 century promoted intensive introduction of soda first of all to confectionery business. At first, France and Germany used soda as a technological additive for loosening dough to increase its volume and improve its quality. Soda makes dough soft, fluffy, and easy to digest. Since the late 19th early 20th century, other countries began to use soda.

The industrial method of obtaining soda gave ample opportunities for the preparation of many types of modern confectionery products in European countries.

Like the ancient Egyptians, who obtained natural soda from lake water by evaporation, people used other properties of soda. It has neutralizing qualities and is used in medical practice to treat gastritis with increased acidity. Able to kill germs, it is used as a disinfectant: soda is used for inhalations, gargles, skin cleansing.

Soda is an indispensable everyday aid in the kitchen for washing dishes, canning containers, some fruits and berries before drying. It has the property to neutralize and kill odors.

It is a mistake to think that baking soda is a spice only for confectionery. Peoples of other countries use it in meat dishes, drinks, sweets, etc. For confectionery and other purposes, soda is put as prescribed in recipes, usually very small doses. It is stored in an airtight container, taken with a dry object.