This product is out of stock, but here are similar 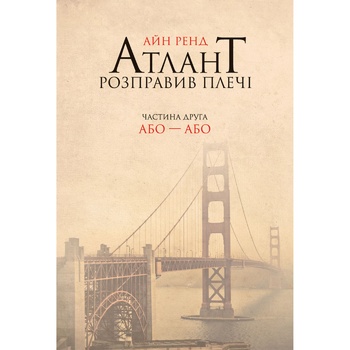 In numerous interviews with the American press, Rand stated that a person should live not for the sake of others, but primarily for himself. The author was accused of selfishness and straightforwardness in presenting conflicting ideas of her philosophy of objectivism. Rand argued that everyone "must defend goals and values, fight for them, because this is the essence of the life process." Stormy discussions of the fundamental trilogy, the great "political parable" have been going on since 1957, since the day of its first publication, three generations of Americans have grown up on it, millions of "Atlanteans" have spread around the world. Three parts of the trilogy are named according to the basic laws of logic: "Consistency", "Either-or," A is A ". They all feature brilliant worldview monologues embedded in the protagonists Francisco D’Anconia and Genk Riarden. Between them is a woman they are both in love with - Dagny Taggart. Their country is rapidly flying into the abyss: a terrible crisis covers all spheres of human life. Pseudo-scholars insist that thinking is an illusion, that the search for any meaning is absurd, and that the government eventually declares a moratorium on reason. Talented entrepreneurs disappear without a trace, abandoning their production at random or destroying it. Dagny is convinced that a mysterious Destroyer has appeared in the country, the goal of which is the collapse of the economy and the total degradation of the people. For hundreds of pages of the book, the characters and readers are troubled by one strange question: "Who is John Gault?"